These wrongful termination claims hinge on the fact that someone was wronged in the workplace.  And that your employer should have been in a position to stop this wrong.

This guide will help inform you regarding your rights.  We hope to empower you with the information to detect wrongful termination.  And to also ask the right questions when choosing an employment attorney.

It may seem counterintuitive, but your best protection against wrongful termination in Pennsylvania is actually federal law.  Federal law is the law that governs and protects everyone in the United States of America.  Congress, as you may know, has the ability to pass federal laws.

Wrongful termination is the violation of employment law that ends in your employer firing you.  It might be a violation of anti-discrimination laws or other state laws.

So, how does federal law protect against wrongful termination in PA? Back in the 1960s Congress passed a series of federal laws to protect employees against discrimination.

So, even though employment is at will, you do have some employment protections under federal law. Discrimination lawyers in PA can further advise you how federal law protects you and your rights under it.

In addition to Title VII, Congress passed other legislation that protects against discrimination.

These pieces of legislation include:

Now, every American is protected from discrimination based on:

If your employer fired you for any of these reasons, you can bring a wrongful termination lawsuit in PA.

How Wrongful Termination Lawyers Bring Your Case to Court

Pennsylvania wrongful termination lawyers start building your case in federal court at the administrative level.  To do that, we must first bring the case before the right federal agency.

If you are a member of one of the above categories, you are known as a member of a protected class or category.  This gives you the ability to file a complaint with the EEOC.  And filing this complaint will start the legal process.

Filing a complaint alleging discrimination is formally known as a charge.  In your charge, you will tell the EEOC how you were discriminated against.  Although you can file a charge by yourself, it is recommended that you contact an employment attorney to file a charge on your behalf.

Even though there is a Pennsylvania state agency, we normally file your charge in federal court.

The Pennsylvania Human Relations Committee (“PHRC”) enforces your rights at the state level.  This can get confusing, so we will try to make it simple.  Essentially, under PA employment law, you have about the same protections that you would have under federal law. 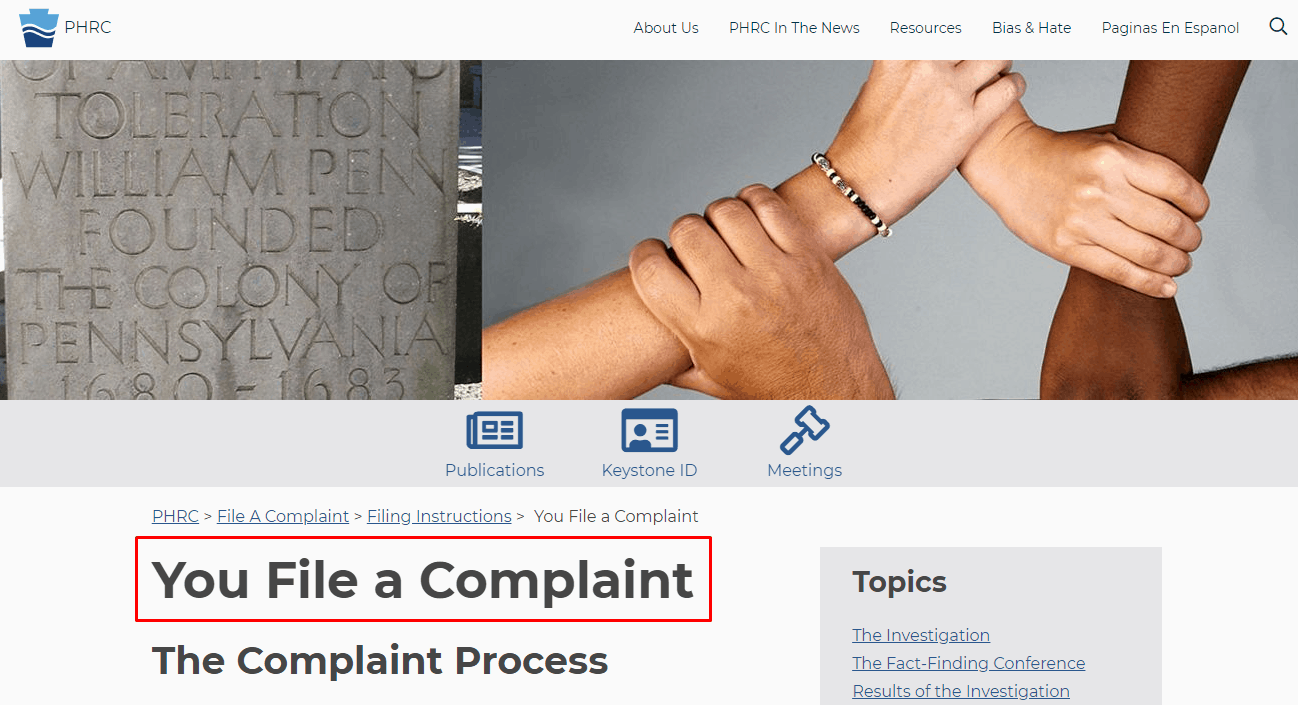 The general exception is that state law provides for more damages and allows you to sue smaller companies.  There are also some exceptions for contract and common law claims.  More on that later.

This is really what you need to know.  You will still, however, likely end up in federal court in Pennsylvania for an employment law case. That’s because your case will be dual filed.  It’s a technical legal term.  But basically, it means that both your state claim and federal claim will be filed in federal court at the same time.

You do have the option of pursuing your case under the PHRC in state court.  But there’s a few reasons that we generally file in federal court.  First, federal court is faster and more efficient.  Second, the big one, there is no right to a jury trial under traditional employment laws in the state of Pennsylvania.

You have this right in federal court. And the right to a jury trial is incredibly important.

If you do not have a jury, a judge will decide your case.  And judges are often not favorable to plaintiffs in employment law cases.  That’s often because they usually spent most of their careers defending employers/corporations on the defense side before becoming a judge.

Your Employer May Have Breached an Employment Contract

Remember when I said that employment is almost always at will? Well, this is the almost.  PA employment termination laws do provide some protection in addition to federal and state statutory law.

If you have an employment contract, the rules are different. Companies sometimes enter into contracts with their employees.

This contract becomes legally binding on the employer and employee.  Certain terms will be laid out in the contract.  And it will most likely state when and how your employment can be terminated. 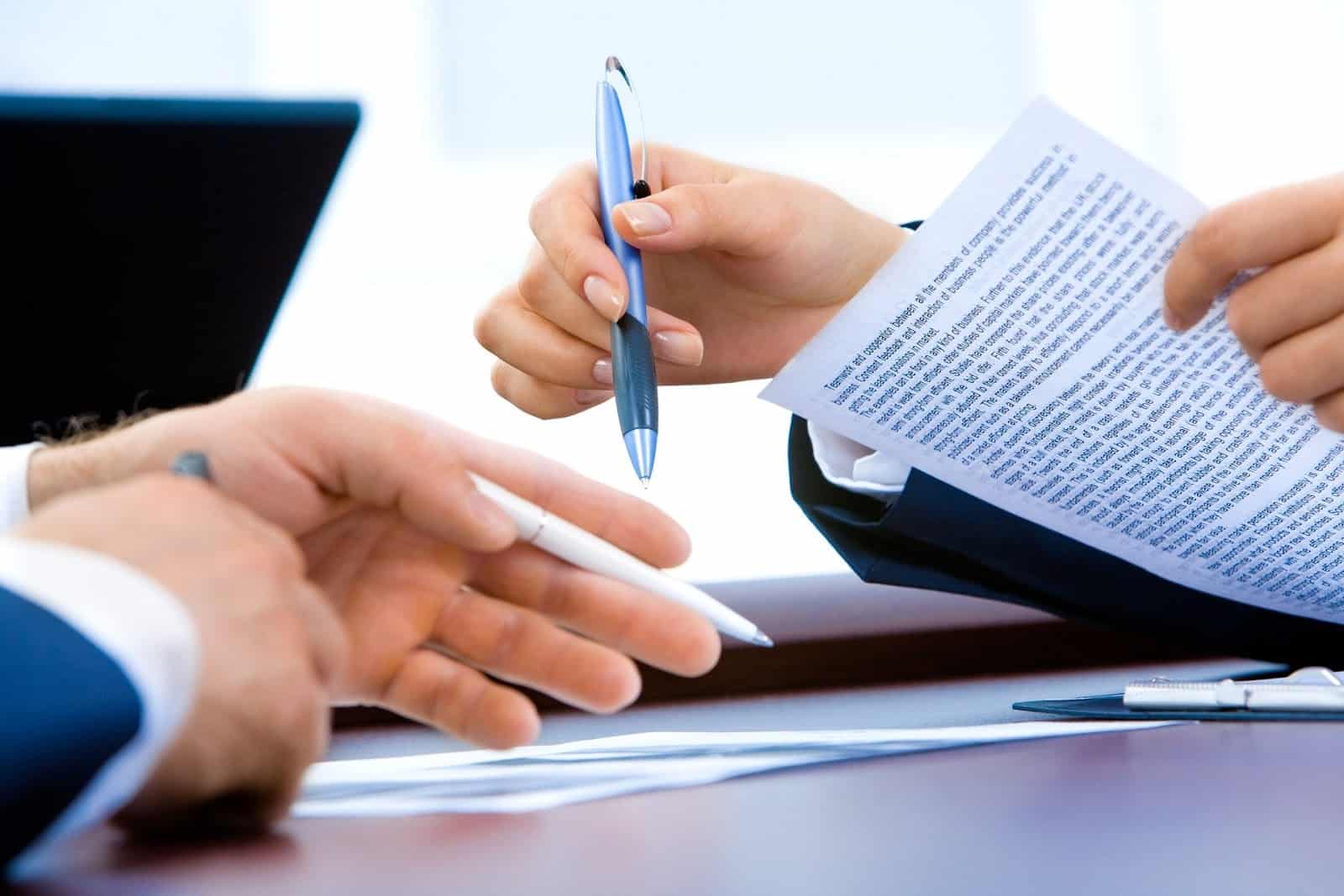 Contract law differs from traditional employment law.   In some respects, it is harder.  Words in a contract never mean exactly what you think.  You should hire an employment lawyer with experience in contract interpretation.

It’s also a good idea to hire a lawyer before you enter an employment contract.  It might cost some money upfront.  But you can save yourself a lot of money on the back end.

These are just a few examples of what an employment attorney can help you with.

You Employer May Have Retaliated Against You

Retaliation is an incredibly important provision in employment law.  In addition to federal law providing broad protections against discrimination, your are also protected against retaliation.

Retaliation occurs when you engage in protected conduct and subsequently suffer an adverse employment action.

Protected conduct is activity that the law deems necessary to prevent further employment violations.  Examples include:

Retaliation makes up a large number of employment law cases.  Be on the lookout.

If you suspect retaliation, even if you have not been terminated, you should contact an employment attorney.  An attorney can guide you through the reporting process.  And also help you determine what options you have.

Other Wrongful Termination Causes of Action

The common law is law that is created from judicial decisions instead of statutes or legislation. The basic meaning is that there are longs that were created long ago.  And they were never codified into statutes.

Judges over time would follow these laws.  And they continued to evolve and slight change with each judge weighing in on what the law should mean.  This leaves us with many of the laws we currently have today.

Without devling to far into the logic behind these judicial laws, you should also know that the common law that remains most relevant today is tort law.

When employers commit a wrong (tort), they have to pay you money because they damaged you.

There are a few common law torts that often pop up in wrongful termination cases.  Although, technically, you don’t have to be fired to have a cause of action, they often arise during or after your termination.

Defamation is a tort that we see a lot in common law cases.  Defamation means that your employer made a false or inaccurate statement about you.

There are two types of deformation: 1) slander and 2) libel.  Slander occurs when your employer made an oral statement.  Libel occurs when the statement was written.

There are four elements that you must prove in a defamation case:

We see this a lot with employer references.  If your employer falsely tells another potential employer that you are an incompetent employer, you might have a defamation suit.

First, the employer published the statement.  That means that the employer told a third party.  The statement was false, you could show that you had excellent employment evaluation while at the company.

Next, the statement injured you.  If you did not get the job, you were certainly injured.

Lastly, the statement was not privileged.  All this means is that this was not a situation in which th law should punish your employer.  This occurs often when a witness testifies in court or at a deposition.  Even if the statement proved false, the law has an interest in these people not being sued.

This could be searching your drawers at work without a reason.  You should know, however, that you likely do not have a claim if your employer has a reason to investigate.

Perhaps a coworker informed your employer that you were using marijuana on the job.  Your employer then searches your drawer.  In this case, like a criminal case, your employer is likely protected because they had reasonable cause for doing so.

The elements of this case claim are:

This is an intentional tort.  That means you have to prove that your employer intended to harm you.

Fraud occurs when an employer induces you into doing something by making false promises and/or misleading statements.

For example, employment is at will.  But an employer cannot promise you job security to lure you into taking the job.  This would certainly be a material misrepresentation.  Or maybe your employer promised you a raise within a year.  And you never get the raise.

Unfortunately, because employment is at will, employers sometimes feel that they can tell any employee anything they want.  And then fire the employee after doing so.

This, however, is not legal.

If you suffer harm from this retained employee, you might have a case for negligence.

You can think of the public policy exception as a catch-all.  If your termination is against an established public policy of Pennsylvania, you have recourse.

A common example of this is if your employer asked you to do something illegal and you refused.  There is obviously a strong public policy against criminal behavior.

In this situation, you would likely have a claim for wrongful termination.

Wrongful termination law combines employment law statutes with common law claims.  As you can see, there are lots of different claims that you may have in any given employment case.

You need an attorney that is well-versed in all the laws that could apply to your case.  The more claims that you are able to bring, the better shot you hat recover.

The Lacy Employment Law Firm is here to help.  We have experience in traditional employment law claims and tort law.  We also take no fee unless we are able to recover on your claims.

You have been wrongfully terminated.  Are you going to bring your case to federal court and recover damages from your employer’s conduct?