This is because everyone, at some level, understands that a person within their company might retaliate against them.

Perhaps you reported that your supervisor was taking breaks on the clock.  Or maybe you’re a corporate executive concerned with your company’s shady financial dealings.

In both cases, the law protects you.  You have protections under the law when you do the right thing.  That is, reporting some type of illegal workplace behavior.

But no good deed goes unpunished.  If you do blow the whistle, your company might fire you.  That’s where we come in.

A good retaliation lawyer can help.

Difference Between Retaliation and Whistleblowing

For our purposes, there is not much difference between whistleblower laws and retaliation laws.

Retaliation, on the other hand, protects employees from retribution.  Employer retribution can come in many forms.

More on this later.

But remember, whistleblower laws provide you protection.  And anti-retaliation laws punish an employer for seeking vengeance on you for blowing the whistle.

Let’s run through a few whistleblower laws that employees commonly come across.

Federal laws and state laws protect employees from retaliation.  These laws are commonly referred to as whistleblower protection laws or anti-retaliation laws.

Federal law is enforced by a federal government agency.

The Occupational Safety and Health Administration (OSHA) and the Equal Employment Opportunity Commission (EEOC) are the government agencies that enforce federal law.

In response, the government cracked down.  Congress passed the Sarbanes-Oxley Act to prevent further corporate scandals.

This is a traditional whistleblower law.

The False Claims Act (FCA) is another type of whistleblower claim.  The FCA provides that employees or companies that submit false claims to the government will be held liable.

The FCA allows an employee reporting the fraudulent activity to sue on behalf of the federal government, under certain circumstances.

This is called a Qui Tam lawsuit.

CERCLA is the country’s preeminent environmental law.  It regulates and prohibits companies from engaging in illegal environmental practices.

This prohibition penalizes companies that release or threaten to release hazardous substances.

CERCLA protects employees from retaliation for reporting violations of regulations involving accidents, spills, and other emergency releases of pollutants into the environment.

Traditional employment laws can also be viewed as whistleblower protection laws.  Employment in the United States is at-will.

This means that your employer can fire you for any non-illegal reason.

Congress passed laws to modify this general rule.  This means that certain classes of people are protected from termination and other adverse employment consequences.

These laws protect you when you blow the whistle on when an employer tries to violate your rights under the many employment laws.

Title VII protects against discrimination and harassment at work against those that fall within a protected class.

Most people fall within a protected class.  Title VII prohibits discrimination or harassment based on:

This means that you may report these employment violations to your employer.  And you have job protection when you do so.

In addition to employment statutes, labor statutes also provide whistleblower protection.  Each of the following has provisions that provide job protections for those that report labor violation at work.

The FMLA provides certain employees with the right to take unpaid leave to care for themselves or a loved one.

If you qualify for FMLA, your employer cannot interfere with this right.  Or retaliate against you for exercising it.

The FLSA requires employers to pay a minimum wage, sets overtime provisions, and classify who may or may not receive a salary for their work.

Although not necessarily considered a “labor statute” the worker’s compensation act also has anti-retaliation/whistleblower provisions.

Although some lawyers may quibble about what is a whistleblower statute vs. what statute has an anti-retaliation law, we need not complicate this.

The job protection that you enjoy is to be free from retaliation.

Whistleblowing is a right you assert.  Retaliation is what happens to you because you asserted that right.

How to Prove a Retaliation Claim

To succeed on a retaliation claim, you must prove four elements:

1. That you engaged in protected activity

Protected activity means that you engaged in some type of activity that the law deems important.  This could be whistleblowing as described above.

But it can also include other types of workplace activity.

There are types of activities that violate public policy.  Your employer can’t force you to do anything illegal.

Your employer cannot punish you for discussing your salary with co-workers.

More on this later.

2. That your employer was aware of the protected activity

Your employer cannot be found liable if it wasn’t aware that you engaged in protected activity.

3. That your employer took an adverse action against you

An adverse action means that your employer negatively changed your employment status.  This could mean termination, demotion, reassignment, or material change in job responsibilities.

Your employment must have been affected in some way because you engaged in protected activity.

4. There is a causal connection between the adverse action and the protected activity.

This is usually the most important area in a retaliation case.  You have to prove that the adverse action that you suffered was caused by your engagement in a protected activity.

This is commonly proven by timing.  How close was the adverse action to your protected activity?

Although not completely detrmative, courts often dismiss retaliation claims that are too far removed from the protected activity.

A retaliation attorney can advise you on whether your case fits this element.

What are Some Examples of Retaliation?

Examples of retaliation really depend on the type of protected activity.  We know that whistleblowing is a clear example.

We have discussed laws that protect you when reporting workplace violations.

These are a few examples.  But, even if your situation does not fall within one of these examples, that does not mean that no retaliation occurred.

A retaliation attorney can advise you on your specific situation.

Can You Sue Your Manager for Retaliation?

You certainly can sue for retaliation.  That’s the point of the anti-retaliation portion of employment statutes.

Not only can you sue for retaliation, but it is actually the most common type of employment claim filed. 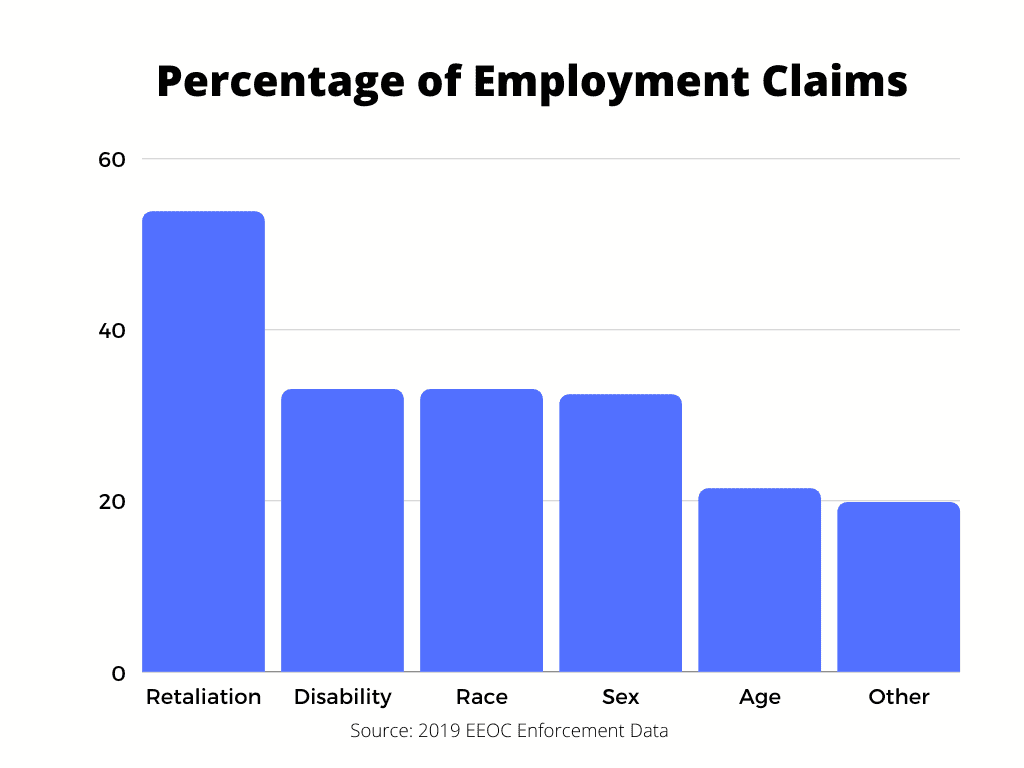 The EEOC released data on the most common type of employment claim.  Retaliation dwarfs the others.

And that’s unlikely to change soon.

How Much Can You Get For a Retaliation Lawsuit?

The amount of money you can get for a retaliation case varies.  It depends on a lot of different factors.

How good is your retaliation lawyer?  How close in time was the retaliation to the protected conduct?

What type of case do you have?

The most important question is typically how much did you lose.  In retaliation cases, you are generally awarded damages based on your back pay.

This means how much money you lost because you were out of work.

If you’re a high-level executive making $300,000 per year, then you would likely win a lot more.

The potential or a higher settlement only gets higher with the longer you are off work.

But if you do not make much money and you have not been off work for long, you can expect a much lower settlement.

This is true regardless of whether you have a good case.

How Long Does it Take to Settle a Retaliation Case?

A common question that we get is how long does a retaliation case take to settle.  This depends.

With retaliation cases, you will almost certainly have to first go through an administrative agency.

An administrative agency is an agency like the EEOC or OSHA.  They will have the first opportunity to evaluate and investigate your case.

Your case might settle while its with the administrative agency.  But it’s likely that it will not.

You will then have to take your case to federal court if it does not settle.

A lawsuit in federal court can take between a few months and a few years.

This depends on whether your case goes to trial.  The vast majority of cases settle well before trial.

It’s hard to tell whether your case will be one of them.

I’d say that, if you wanted my best guess, it will take you at least a year.  But it could be sooner.  Or it could be later.

Retaliation cases are important.  This is your protection against company misconduct.  It also serves an important public purpose.

Without these laws, companies would be free to treat its employees illegally.

Further, in the past, companies have done things that have harmed the public.

Without employees willing to step up and blow the whistle, companies will continue to do harm.

Whether it’s defrauding investors or polluting the planet, whistleblowers are our best defense.

Remember, there are numerous whistleblower and anti-retaliation laws that provide you with protection.  If you want to discuss your case with a retaliation lawyer, we give free consultations.

Have you witnessed illegal workplace behavior?  What will you do about it?

If you need a retaliation attorney in Philadelphia or Pittsburgh, we are here to help.

Black Lawyers in Philadelphia are Hard to Come By