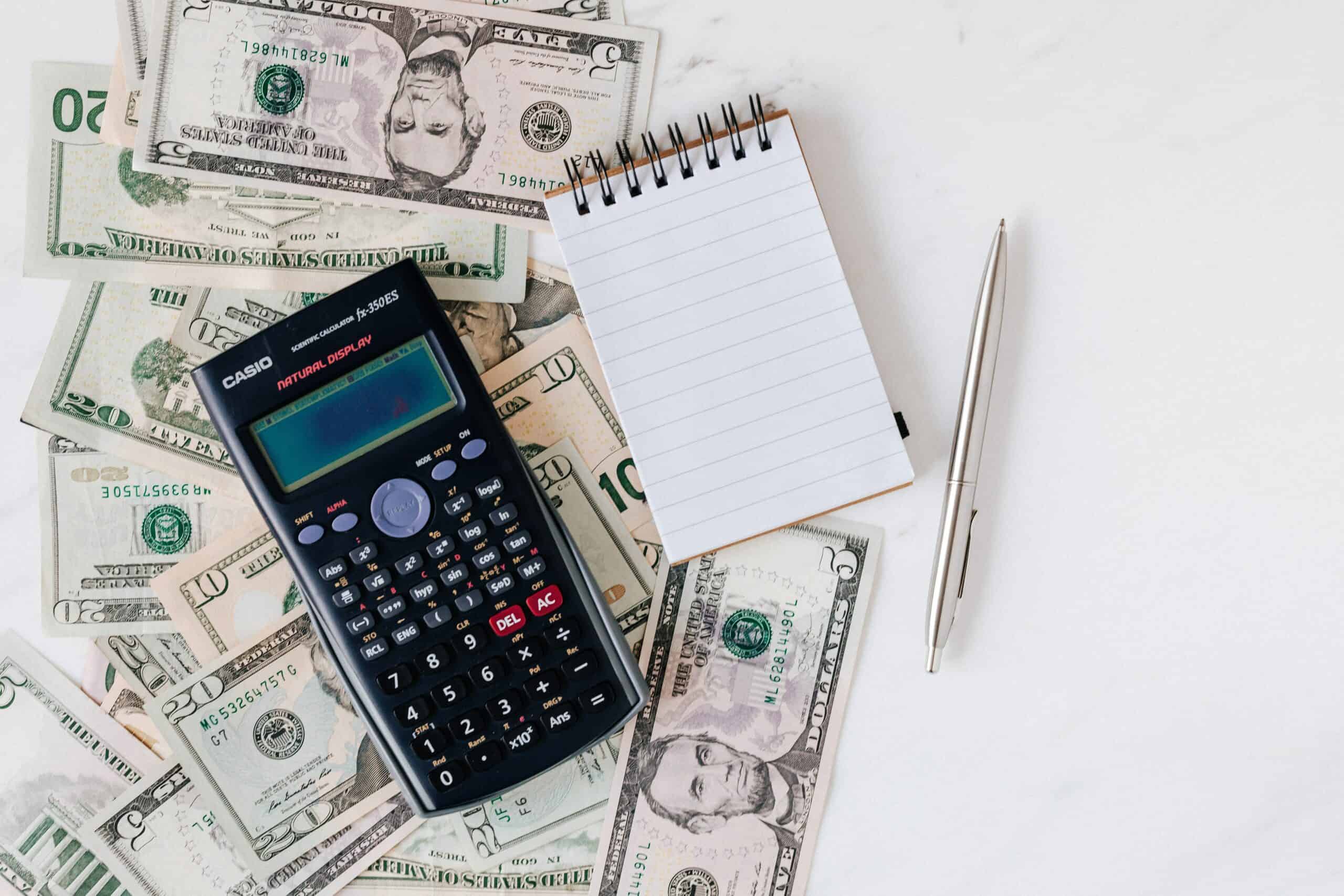 Minimum wage in Philadelphia has been stuck at $7.25 for years.  I’m sure you’re wondering if they are ever going to raise it.

Unfortunately, from the data, it looks like we are going to have to wait for President Biden to raise the minimum wage across the county.

As of right now, the minimum wage in Philadelphia is $7.25 per hour for non-government workers. It is $14.25 for city-government employees and applies to:

The Federal Minimum Wage is the Floor

The Fair Labor Standards Act (FLSA) is the federal law that sets the minimum wage in the United States.

Federal laws apply to every state.  And every person.  This means that all companies are obligated to follow federal law.

Currently, the FLSA sets the federal minimum wage at $7.25.  This means that no employer can pay a worker less than this amount, subject to a few exceptions.

This does not mean, however, that states cannot choose to raise the minimum wage in its respective state.

Many states have already done so.

Is Philadelphia Minimum wage Going Up?

Whether Philadelphia’s minimum wage will go up depends on whether the city of Philadelphia passes legislation raising it.

At the city level, cities are free to raise their minimum wage.  This applies to people who work in the city.

Famously, Seattle increased its minimum wage for the city of Seattle to $15.00.  This move drew national attention.

So, who was right?

Is Minimum Wage Going Up a Good Thing for Philadelphia?

According to an article published in 2019 by Vox, results from the Seattle experiment were mixed.  Companies largely did not flee for the suburbs to avoid paying higher wages.

Instead, companies cut hours for low-wage workers.  This resulted in them seeing the same pay as before but with less hours worked.

Arguably, this is a good outcome for workers.  Less hours worked means more time at home or the ability to get a second job in the gig economy.

So, if a similar wage increase occurred in Philadelphia, it would appear that higher minimum wages would ultimately rise for workers.

Philadelphia Appears to Be Trending Towards a Higher Minimum Wage

The ordinance applies to all city employees, contractors, and subcontractors.  Philadelphia’s ordinance increases minimum wage for government employees as follows:

After July 1, 2023, Philadelphia’s minimum wage for government employees will continue to rise based on the Consumer Price Index for all Urban Consumers.

This ordinance also applies to entities that have contracts with the City of Philadelphia.  This includes:

The above entities, except financial aid recipients and recipients of leases and other agreements, are subject to certain exceptions from the minimum wage law.

The exceptions include exemptions based on annual gross receipts during a 12-month period.

When Will the City of Philadelphia Raise Minimum Wage for Everyone Else?

Philadelphia is a large, progressive city.  The fact that Mayor Jim Kenney signed an ordinance for government workers and not other workers is surprising.

Philadelphia is now the six largest city in the United States.

Despite Philadelphia being the sixth largest city, it has one of the lowest minimum wages amongst major cities in the country.

If we take a look at this chart taken from Pewtrusts, Philadelphia is amongst cities like Nashville, San Antonio, Oklahoma City, and Pittsburgh.  These cities are smaller and known to have more moderate/conservative politicians creating legislation.

Compare this chart to the cities that sit at the top for minimum wage in the United States.

As you can see, cities like New York, San Francisco, Chicago, and Boston are all liberal cities with a tremendous metropolitan population.

Yet Philadelphia has not kept up with these cities regarding minimum wage.

Here’s a look at the poverty rate amongst the most populated cities in the country.  Detroit is the clear winner at 30.6% 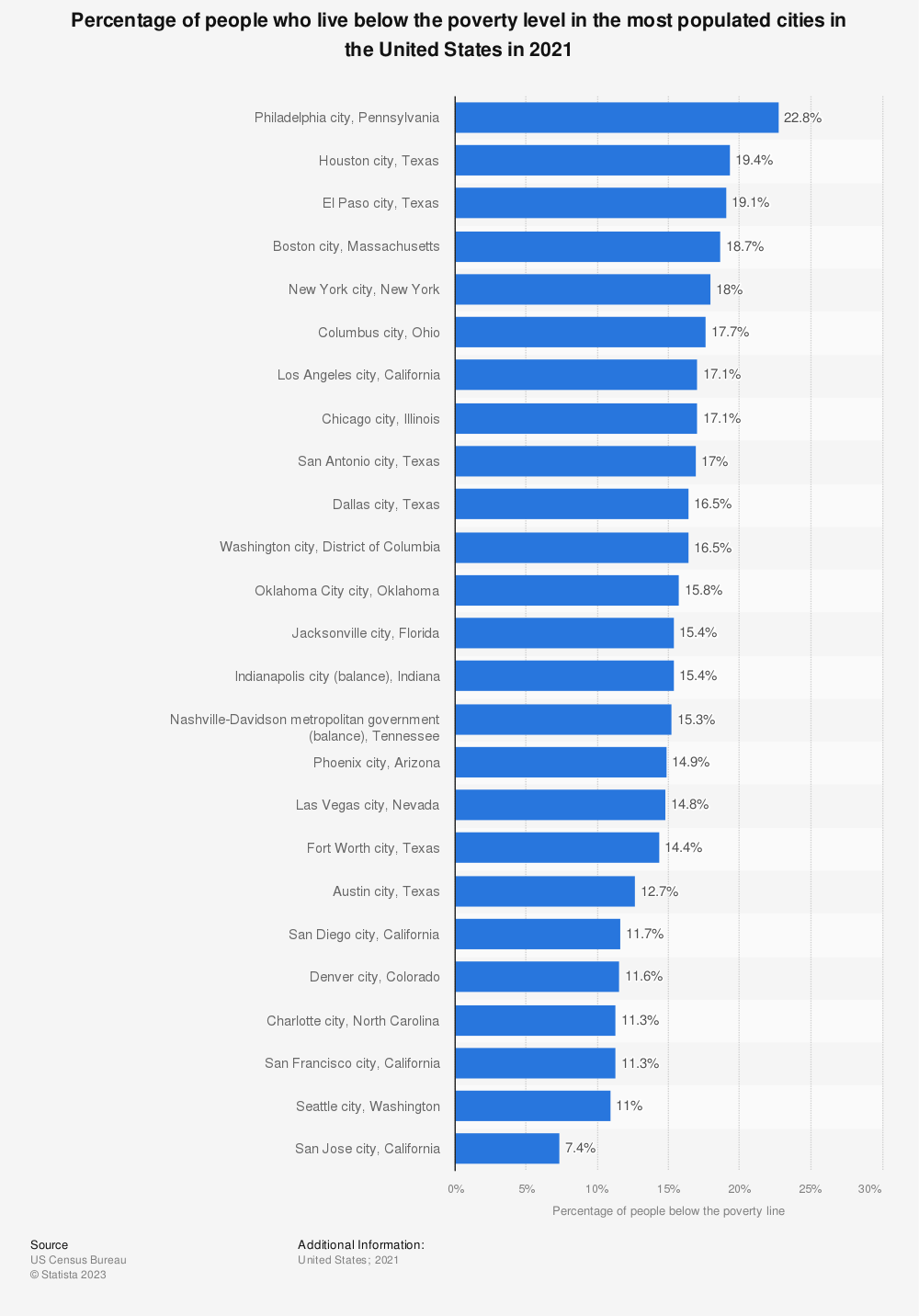 Philadelphia’s poverty rate is certainly high at 23.3%  And, at first, you might think that’s the reason that the city of Philadelphia has not raised minimum wage.

On the other hand, Houston sits at 19.7%.  And it is the other major city in the country that has not raised minimum wage. Yet Detroit, sitting at 30.6% poverty, has a higher minimum wage than Philadelphia.

What About Cost of Living?

Philadelphia’s cost of living is not New York’s.  But it’s not cheap.  This one actually surprised me.

When will the minimum wage go up from $7.25 per hour?  I’m not sure.  Philadelphia is a large city, has a progressive city leadership, a decently high cost of living, and is only slightly poorer than other major cities.

This combination should lead to a higher minimum wage in the city soon.  Hopefully, the new administration will raise the federal minimum wage so we do not have to worry about this.

Why Minimum Wage Should be $15 an Hour

A good question to ask is whether minimum wage should be $15-an-hour across the board.  There’s many business owners who argue that it should not be.

The first argument for raising minimum wage is that it would increase wages and lift people out of poverty.

There are studies that back this argument, stating that the wage increase would lift 1.3 million people out of poverty.

On the other hand, a business owner in rural Ohio will have a much tougher time paying this wage to all of its workers than a tech company in Silicon Valley.

Will this business owner have to let certain of his or her employees go?

There are studies that claim that raising the minimum wage would cost 1.3 million jobs.

Should We Bother Raising Minimum Wage Then?

I do not have the answer on who is right.  I’m not an economist. I’m a labor and employment lawyer.  But from a policy perspective, it’s always better to aim for the best.

Really, this legislation was aimed at protecting black people.  Yet we also included women, religion, and national origin in the bill.

At the time, people believed that including women in the bill would kill the legislation.

Yet, it didn’t.  And its inclusion in Title VII jump started a new women’s rights movement.

What does this have to do with minimum wage?

Well, I believe the same is true here.  We should aim high.  And we should aim for what we know theoretically would be best, and then figure out how to implement it on the back end.

I think we are all hoping that minimum wage will increase to $15.00 an hour in 2021.  It all depends on what President Biden is able to accomplish during his presidency.

President Biden has numerous issues on his plate.  And to where he turns his attention first is anybody’s guess.  But the recent stimulus talks make me hopeful.

I think that we will see a national raise in minimum wage, making this article moot. Philadelphia will likely never raise its minimum wage.

From the data, it appears that Philadelphia will not raise its minimum wage on its own anytime soon.

It lags behind most large cities in the county.  The cities to which it is most similar have all raised minimum wage.

Yet Philadelphia has chosen to not raise it.

Our likely best hope is that Congress will pass a $15.00 minimum wage sometime soon. If you have questions regarding your wages and compensation, you can contact a Philadelphia labor lawyer.